The series, Fan Club, is proposed and conducted by Fig Projects, an architectural research studio based in Montreal, Canada. It focuses on how noted architects respond to the work of their colleagues – the buildings they have recently visited, the architects they admire and the projects that may be influencing their own design. The idea is to explore how contemporary architects understand and interpret the work of others, and how this can nourish their own practice. Here, Wonne Ickx, founder of Mexico City architecture studio PRODUCTORA, talks with architectural Fabrizio Gallanti about a project that has inspired him: Villa Voka in Kortrijk, Belgium, from 2010. Designed by OFFICE KGDVS, Villa Voka is an office building of the Chamber of Commerce of West Flanders.

Fig Projects: How did you find out about this project?

Wonne Ickx - I have known Kersten Geers and David van Severen since our time as architecture students. We all studied at the University of Ghent, but it was not until Kersten and I were both working for Neutelings Riedijk Architects (NRA) in Rotterdam that we became good friends. A similar education and a year in Madrid (Kersten studied under Ábalos and Herreros and I had Mansilla and Tuñón as professors) brought us closer together. We share similar references and understand each other’s vocabulary.

FIG: Have you chosen this building as a way of reflecting on OFFICE KGDVS’s wider oeuvre?

WI - I would say that it is a combination of factors. For us at PRODUCTORA, their work is an important reference point since they also believe in precise formal and geometrical underlying structures as a conceptual framework to develop their projects. I was already intrigued by this project in its competition phase, especially the ambiguous relation between the rectangular footprint of the building and the L-shape office volumes. Then I visited it when it was under construction and again this summer I saw it finished and in full operation.

FIG: Do you consider the building to be a significant example of OFFICE KGDVS’s production?

WI - When they won the competition for Villa Voka it represented a large commission for the studio. What is most striking about this building is how generic it is. It’s located in a nondescript light industrial area that characterises much of the Flemish landscape. Voka is the Flemish organisation that promotes the local economy, which is quite a boring and generic set of functions to work with. The activities required were not particularly stimulating. It became the role of architecture to transcend such conditions. Such a situation is quite different from our work in Mexico, where we tend to receive very specific and rather original commissions, often in historically charged settings. What interests me in this project is how architecture can respond towards such banality. KGDVS adopted a very subtle approach in the way they located the building, both in its relationship to the roads and with the idea of a slight slope on the site, which became a key element of the project.

FIG: What are the salient features that you most appreciate?

WI - In general, corporate clients want to get away with the austere look, which leads to quite dumb forms of expressiveness. Instead the project is very astute because it plays with a certain modernist simplicity, which is quite restrained. As a result, the glass façade towards the street is very powerful. At first, it presents itself as a perfectly geometrical, modular façade – as a good, decent and conformist architecture. But on closer inspection, the whole building gives simple clues that pull it away from well-behaved architectural geometric purity: the square ground plan is not square, the glass modules have abrupt adjustments at the end of the façade, the landscape is allowed to distort the orthogonal composition, and so forth. All these decisions could easily have been made in a different way, trying to pursue order and regularity. Instead they are done very deliberately in order to show the true nature of the building: it does not conform to a predetermined system of rules, but rather it problematises the modern rationality, while using the language and tools of that same modernity. Actually, I would say that the reference is not even modernity in a ‘noble’ sense, but rather banal office architecture. The relationship of modernist architecture with landscape and topography is also the topic of a design studio we are running at the IIT (Illinois Institute of Technology) in Chicago. Modernist architecture always seems to have instigated a healthy distance between the ground and the building (just think of Le Corbusier’s pilotis). Instead, the way in which the Voka building touches the inclined slope by means of that fine and fragile line of glass is just fantastic.

FIG: What particular features struck you most?

WI - What I really like is how the formal ambitions of the architecture are capable of re-organizing the location of different functions around the building. For example, how an unusual pairing of the terrace and adjacent machine room completes the silhouette of the building. The design has succeeded in subjugating elements that often escape the control of architects. I also appreciate the fact that the building looks so utterly generic. There is no need to present it as something unique, original or worth looking at. It just stands there in all its naturality – well, the ‘naturality’ of a Flemish industrial park area. This “absence of rhetoric”, as Kersten often calls it, is very appealing to me. There is one detail that is quite revealing of their attitude. The staircases are very well executed, with a beautiful concrete. Some architects would have left the material visible, to show their construction prowess. Instead, here the volumes of the staircases are painted in primary colours – yellow and red – almost obliterating that aspect.

FIG: You sound quite familiar with their work. Were there elements that particularly surprised you when you visited Villa Voka?

WI - Well, I was intrigued by how well the steel mesh screen, applied on the façades towards the inside of the L-shaped volume, works. When approaching the building diagonally over the square – you basically just step on the building before you step in the building – the façades become really abstract. Then, when you are in front of the elevations, the screen blurs away again. It is a quite delicate way of interacting with the movement of those using the building. Also, the extreme clean solid concrete ceilings of the interiors are really remarkable, as they are not often left this rough in office buildings. It is amazing they pulled that one off! They installed raised floors for all technical requirements and a cheap carpet to control the acoustics. So the usual suspended ceiling is absent here. It is a surprisingly simple building, built with cheap and accessible materials. During my last visit, I realised that the integration of the building within the surroundings is well thought out, too. Even the parking lots are part of the composition. I believe they are designed by the landscape design practice Bureau Bas Smets: they subdivide the parking space into a series of outdoor ‘rooms’ aligned by high hedges. Very beautiful.

FIG: How would you relate Villa Voka to other buildings that are important to your architectural thinking?

WI - I see this building paired with Norman Foster’s Willis Faber & Dumas Offices in Ipswich (1974). Although their overall forms are very different – Foster’s footprint is irregular and organic and KGDVS’s orthogonal – they both respond to a specific context. In both buildings, technical spaces are located within the envelope of the architecture as if they were just another regular function. Both in Willis Faber & Dumas and in Villa Voka, they are plainly visible from the street: in Foster’s case at ground level and in KGDVS’s case on the upper floor. They are also both adjacent to leisure spaces: the swimming pool and the open-air terrace respectively. In the end, while both buildings are very ‘technical’ and calculated in a certain way, the main goals remain humanistic – even hedonistic, I would say.

FIG: What have you learned from Villa Voka that you might eventually apply to your own design?

WI - Rather than specific features, details or solutions, it is a general attitude that I notice when visiting OFFICE KGDVS’s buildings. We certainly use similar strategies: the sculptural staircases within a relatively neutral structural grid; finding poetry in very pragmatic solutions or constructive details; the overall structural layout (footprint, bay widths, floor heights) as a driving force to define architecture. Ultimately, what the building says is that the quality of architecture is not about materiality and the execution of details, but rather the composition of spaces and the overall impact on the context. Every time the architects could express some architectural skill and dexterity, they decide not to do so and opt instead for understated detailing, the pragmatic solution, the hard edge. By avoiding typical design solutions, and letting the building speak for itself, they create very radical solutions. For me, the building shows that architecture is not an additive process. Instead of boasting architectural virtuosity, this building obtains its meaning through a critical reflection about our discipline, about the generic office space and the bleak landscape in which it is located. 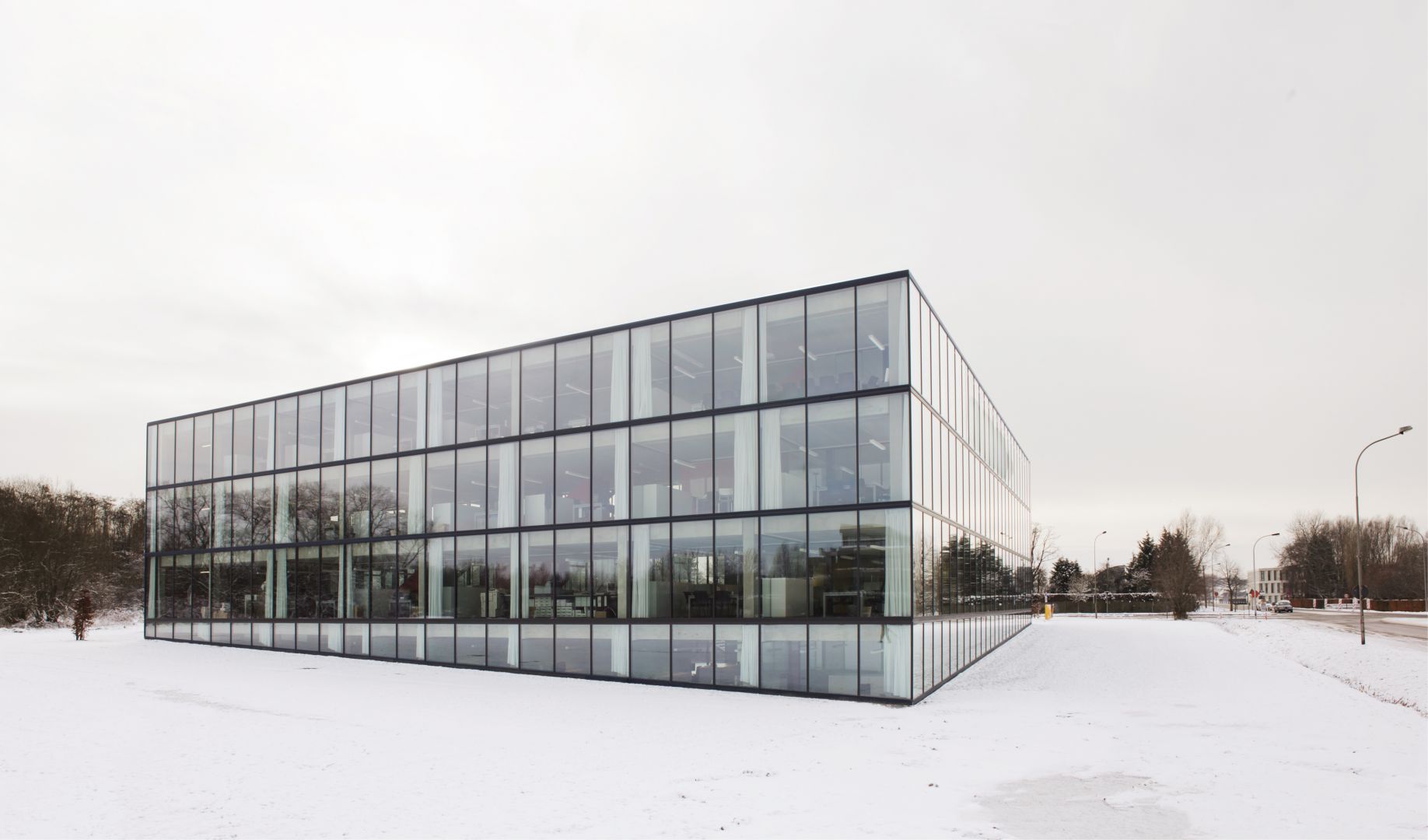