To build houses, you must have sites.
Are they natural sites?
Not at all: they are immediately artificialized.
Le Corbusier, The Radiant City, 1933.23

Modern architecture often had a cumbersome relationship with the land it occupied: spurred by a plan-driven design logic and the industrialization of the building process, uneven landscapes were regularly plateaued flat or remedied by plinths in order to allow the architect an untarnished game of clean orthogonality. In the first of his ‘Five Points of Architecture’ Le Corbusier declared that buildings had to be removed from 'the dampness of the soil' by means of pilotis. [1] That posture was not merely based on a constructive-technical logic, but had a profound cultural significance: for Le Corbusier architecture would ‘not be any longer an ancient entity heavily rooted into the ground by deep foundations, an ancient symbol of the cult of the family and of the race.’[2] Disconnecting the buildings from the ground was a formal expression of an explicit ideological stance.

Although the need for a more site-specific approach was insinuated since the first meetings of the Congrèss Internationaux d’Architecture Moderne (CIAM), it is not until the sixties that ideas about history, context, territory and finally also topography came to the foreground through scholars like the Norwegian architect Christian Norberg-Schultz or the British-American architectural historian Kenneth Frampton. In 1979 Norberg-Schultz wrote in his book Genius Loci that ‘in order to express the history of the place in contemporary designs one should not look at historical buildings, but should instead go back to the original source in the topography.’[3] Frampton, particularly in his text ‘Towards a Critical Regionalism' proposed a new perspective on the term topography shifting it from the narrow geographical sense of 'surface relief', to the broader idea of 'place description', to the operative notion of the 'building of the site' (Botta) and to 'earthwork'. In the fifth point of his 1983 essay ‘Towards a Critical Regionalism’ Frampton placed topography alongside context, climate, light and tectonic form. These five elements should not be mistaken for pre-existing external factors. In Frampton's eyes, they were active and necessary ingredients for genuine architectural commitment. Frampton wrote: ‘The bulldozing of an irregular topography into a flat site is clearly a technocratic gesture which aspires to a condition of absolute placenessness, whereas the terracing of the same site to receive the stepped form of a building is an engagement in the act of “cultivating” the site.’[4] The ‘in-laying of the building into the site’ he suggest ‘has many levels of significance, for it has the capacity to embody, in built form, the prehistory of the place, its archaeological past and its subsequent cultivation and transformation across time.’[5]

Our architectural office PRODUCTORA builds mostly in diverse regions of Mexico, from the sandy beaches in Quintana Ro to the hard basalt formations in Chihuahua. The work we generate at the office, has very much been informed by the topographical and geological conditions of the sites we intervene. From our earlier work like the proposals for Chanchan or Limac in Peru or the Tsunami Memorial Site in Oslo, to more recently build projects, our architecture reveals a strong dialogue with the ground surface. It is in this sense, that the writings of Kenneth Frampton triggered our attention. But what beholds the relation between architecture and the ground it occupies? How do we have to understand the ‘in-laying of the building in the site’? Can new geographical conditions manage to blow fresh air into the globally exported international style? And is the ‘grounded architecture’ of Frampton still of interest?

In 1988, Frampton elaborated part of his plea for a grounded architecture in LOTUS magazine: ‘... giving primacy to the earthwork means to take a stand against the cult of the building as a freestanding aesthetic object. To put a major emphasis on the layering of a building into its site and on the mediated extension of its structure into the ground, means to take a stand against the recent tendency to reduce architecture to fine art.’ [6] His use of what can be described as 'place-form' was a way to counter architectural projects as spatially and culturally detached objects. In a recent interview, he further argued that ‘the object that is integrated into the ground has the capacity to resist … commodification.’[7] Could we then understand Frampton’s desire for rootedness as an act of resistance against a degenerated modernism and an image-based postmodernism; an act against the commodification of architecture tout-court?

Although approaching architecture as a reproducible merchandise and 'reducing' it to the prestige of fine art, seem to be two opposite strategies, for Frampton they both represent policies to inscribe architecture within the realm of commercial speculation: the former by converting architecture into a mass produced real-estate product, the latter by elevating it to a global speculative luxury good, a collector’s item. Frampton wonders if the specific notion of the ground - and the local conditions in general - can help to find a way to counter those flattening trends that produce a global and generic (high or low culture) architecture. For PRODUCTORA, a close attention to the existing surface relief, is a way to circumvent obvious design tropes and worn-out formal solutions. In the proposals for the House in Ginigala, Sri Lanka or the Blas House in Valle de Bravo, the sloped topography becomes the central narrative around which the architectural idea is structured. The house in Chihuahua or the Teopanzolco Cultural Centre are examples of how the existing context is integrated into the architecture, illustrating the idea of 'architecture as constructed ground'.

Frampton’s interest for peripheral conditions can then be understood as an interest in the dramatic topographical conditions for they propose a perfect remedy to the glooming fatigue of a modern architecture that has been more and more flattened out as a suburban lifestyle commodity. Underscoring its historic relevance, topography - built out of 'topos' (place) and 'graphein' (write) literally meaning the 'writing of place' - should therefore be understood as an active partaker in the writing and the construction of a cultural-historic landscape. For PRODUCTORA, it is precisely in this capacity to actively intervene in the 'graphein of the topos', that Frampton’s text is most topical. 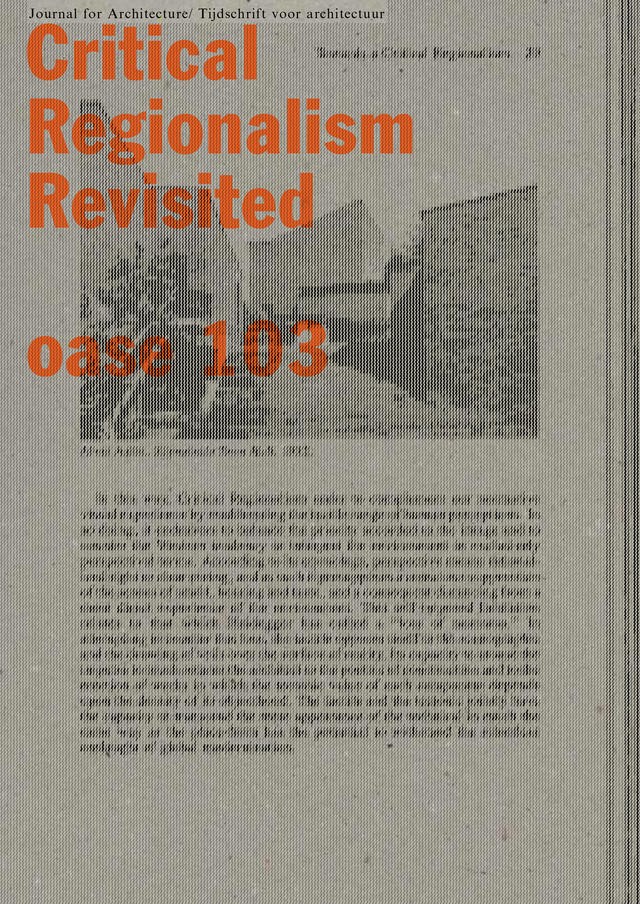