The Hidden Promise of Parallel Projection

In the recent history of architecture, digital visualizations have assumed a leading role. Digital techniques and advanced software make it possible to create surprisingly realistic images before the first brick has even been laid. This direct and easily legible communication of architectural work has downgraded the importance of plans, sections and elevations. Furthermore, following the entry of “renderized” drawings into the field, you can now take veritable walk-throughs and perceive spaces virtually, as if actually present in a given space. The impressive multimedia works created by the Bjarke Ingels (BIG) company provide just one example of contemporary architecture’s forays into this area. As with any novelty in a discipline, a resistance movement has grown in parallel to these technological and promotional developments in architecture. The difficulty in operating complex computer programs and the emotional distance created by these digital interfaces have inspired the revival of more immediate representative ways of making architectural proposals.

Pezo von Ellrichshausen’s precise drawings, Aires Mateus’ black and white contrasts, Valerio Olgiati’s finely drawn lines in CAD, orthogonal projections by Quinton or OFFICE Kersten Geers David van Severen all show a new generation of young architects interest in seeking out - or rather rescuing - certain means of communicating their projects. Black and white architectural drafts want to reclaim their status as part of the architectural discourse. The dualism of this type of drawing, with its intrinsic binary logic, is obviously a rhetorical device - and a need - of communication (1) that demands clarity, precision, and skill. If, as Robin Evans states, “architects do not make buildings, they make drawings for buildings,” (2) then reflecting on the nature and meaning of architectural representation is a suggestive way of considering the discipline itself. The interest in orthogonal projection, in particular the renewed preference for axonometric drawing, a topic that is relevant to this article, deserves at least a passing comment. The resurgence of this mode of representation, with its 30, 45 and 60 degree angles - so directly linked to the drawing made with the set square on the drawing board - seems to be an anachronism in this digital age.

However, it is no accident that axonometric drawing, which is simply a type of perspective in which the vanishing points are placed at an infinite distance, has played a special role in the history of architecture. Parallel projection appears each time questions are asked about measurement, prediction and verification. It is unsurprising that the first systematic descriptions of axonometric projection should occur in a military context: originally they were used to plot three-dimensional trajectories of artillery shells. In the 18th and 19th centuries, axonometric drawing was taught in engineering schools and its development was closely connected to mechanization and industrialization.

In the early 1800s, French architect Jean-Nicolas-Louis Durand’s treatise Mecanisme de la composition proposed axonometric drawing for the first time as the ideal perspective projection for designing buildings. Durand considered that architecture was not about visual gestures or ornate facades with refined touches of historical styles, but rather that an architectural problem resolved well and efficiently would automatically be invested with meaning. To illustrate this, his treatise included pristine plans, sections and elevations, all drawn with fine lines over a regulating grid that kept every part of the drawing strictly in place. In line with his theory, he drafted his architectural proposals with utmost austerity and precision, at the same time as implicitly questioning the tradition of the elaborate watercolor renders produced at the schools of fine arts. Durand put forward a rational and specialized theory of architecture, free from any metaphysical speculation.

A century later, parallel projection would reappear but with a series of parameters that went beyond Durand’s engineering-based pragmatism. The first generation of modernist experiments - directly influenced by Durand’s and Choisy’s drawings - would return to axonometric drawings as the ideal graphical technique to create a new spatial architecture. The up, down, left, right, front and rear positions were given equal weight. Artists such as De Stijl and, especially, Theo van Doesburg drew their projects with lines, surfaces and volumes that floated freely in a three-dimensional Cartesian space. The disappearance of the horizon in axonometric drawings suggested a view of a universal and secular world, stretching out into infinity in the fields of three dimensions. These artists promoted the axonometric method as opposed to Durand’s position, revealing it as a unique tool for a formalist syntax that expressed the mental process of conceiving the space proposed by the architect. However, El Lissitzky, their contemporary, was not content simply to remove the horizon from the drawing; for the Russian artist, designer and architect, this form of conceiving representation in drawing must surpass the limits imposed by three dimensions and include time as a crucial element in redefining modern space. Experiments with film or spatial installations that proposed a moving observer showed the way toward a new, dematerialized space for the artist. A spatial construct where different aspects of reality could be present simultaneously - such as with Cubism - also incorporated different moments in time as the main objective. His Proun paintings became experiments which exploited the Achilles heel of axonometric drawing - basically its inability to distinguish between emerging and receding elements - (3) to create a new pictorial space, capable of involving the observer’s mind, space and time, in a continuous interaction.

We also see a similar intention in the drawings of John Hejduk, in which axonometric projection is built up from specific angles so that the buildings’ vertices are superimposed over each other, collapsing space into a series of graphical elements, thus achieving a pictorial construction that is hard to read in spatial terms. However, the resulting hermetic quality implicit in these constructions condemned the axonometric drawing - especially as it was conceived during the 1970s and 1980s by Hejduk, Gwatmey, Graves and Eisenman - to a type of drawing by architects solely for architects; an abstract illustration of an architectural theory more than a project-oriented method to describe a phenomenological experience.

Above we saw how the disappearance of the horizon and the spectator in axonometric drawings created a methodology of representation in an abstract Euclidian field. But it’s also the lack of light and shade over the volumes that makes the drawn object appear to float in an indefinite space and time in which day and night do not exist. And it is this ambiguous relationship with time that reveals another crucial aspect for reading an axonometric drawing. Whereas two centuries ago Durand used parallel projection to propose an architecture without rhetoric, or rather a representation without rhetoric - as the Smithsons’ put it - axonometric drawing techniques have now become one of the drawing techniques most laden with significance and therefore with rhetorical baggage. The removal of vanishing points and the subject from the drawing’s frame not only dislocated the architectural object in space, but also in linear time. The immediacy of traditional perspective, like a photograph taken at a specific moment - is substituted by a drawing created outside a specific temporal and spatial framework.

If anyone is intrinsically connected to the current attention focused on isometric projection, it is James Frazer Stirling. Stirling, the third architect to win the Pritzker after Philip Johnson in 1979 and Luis Barragan in 1980, is once again in the spotlight of architecture following a series of publications, articles and exhibitions. (4) His work powerfully combines a modernist vision with a formal historical inheritance; it was controversial and relentlessly criticized by reactionary architects and progressive colleagues alike, because it transgressed the barriers of both ideologies. “The main tool to expose the results of Stirling’s work is the black and white axonometric drawing (...) these drawings describe with mechanical precision the formal organization of the buildings, showing neither materials, nor light, shadows or drama.”(5)

For Stirling, axonometric drawing was the most accurate means of representing his buildings, not only - as many writers have pointed out - because he was able to define plans, sections and facades of a design in a single image without distortion of measurements, but rather because of his ability to place the building outside a defined temporal framework. The freedom with which Stirling combined typologies, backgrounds and historical details in his architecture required a representation which enabled contemporary, historical and futuristic features to coexist without the unavoidable restriction of linear time. Stirling’s work occupies an indefinite place in time; his work, simultaneously modern and ancient, dodges a contextual commitment by using isometric drawing (6) and by placing all the compositional elements in juxtaposition in the same scale and with the same importance. The “difficult whole” of Stirling’s work is defined as a balance struck between anachronistic elements linked through its formal composition. His projects and reductive axonometric drawings truly call into question the modernist idea of progress and the conception of linear time.

It is hard to know if the renewed interest in axonometric drawing derives from nostalgia for the architectural discipline and detail in the style of Durand in reaction to the populist and “promotional” language of digital visualizations. Perhaps the return to orthogonal techniques of projection shows a desire to recover and reestablish the discipline of architecture as something more than an efficient and direct response to the requirements of the market. At this historical juncture, as there is uncertainty about whether we should be looking forwards or backwards to lay the foundations for a new ethical framework for contemporary architecture, axonometric drawing - as an intellectual construction that is disconnected from a specific time - once again appears to be a useful tool for an architecture that places equal value on its historical heritage and its longing for innovation.

(6) The terms to describe parallel projections in the European languages changed through time, and this has created some historiographic confusion. Axonometric projection was sometimes defined as a special case of isometric projection and vice versa. See Perez Gomez, Alberto and Pelletier (1997), Louise, Architectural Representation and the Perspective Hinge, MIT Press, Cambridge, p. 308. 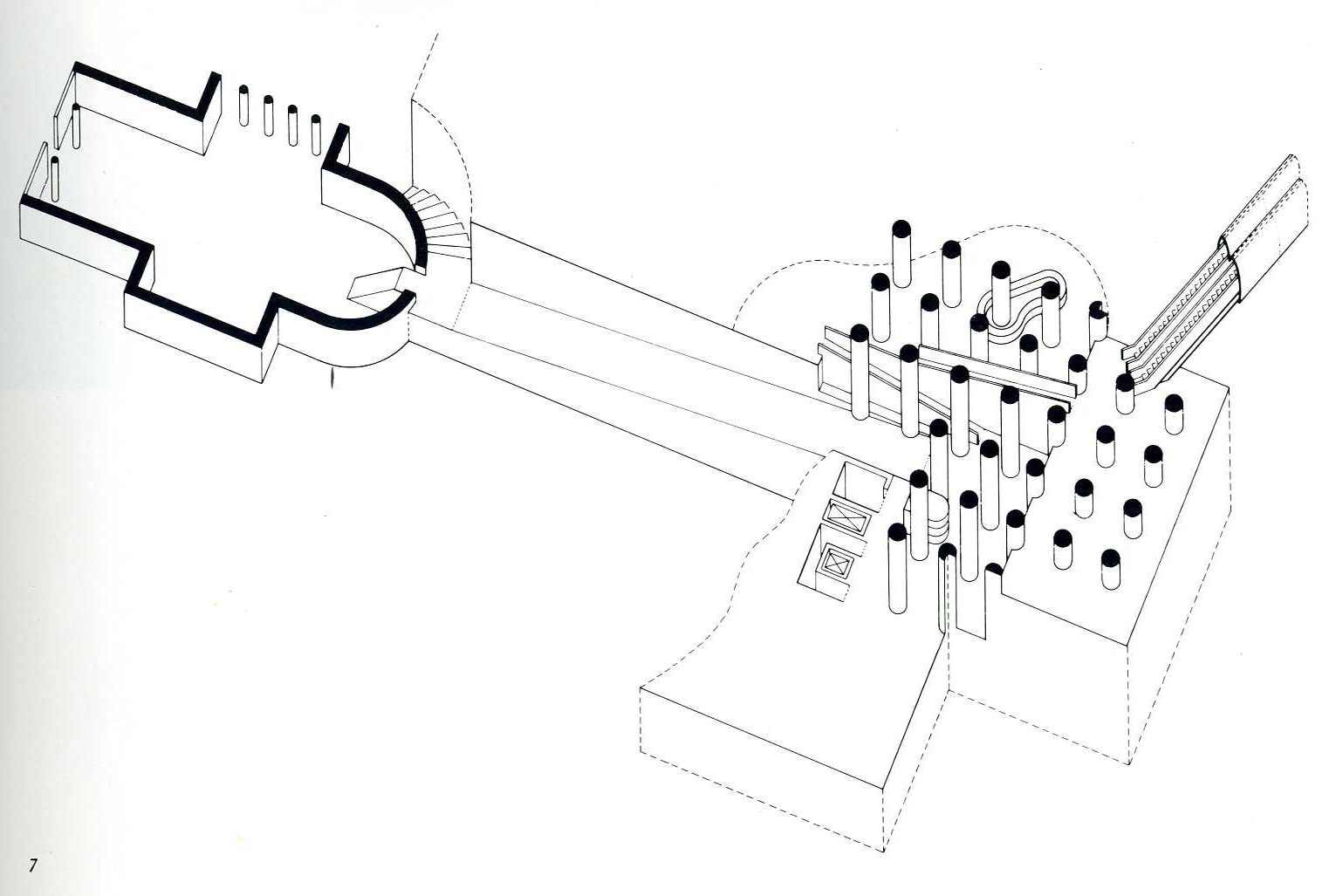