For all the Wrong Reasons, Myron Goldsmith and the Mc Math–Pierce Solar Telescope

In March 1984 Reyner Banham wrote an article for the journal of the American Institute of Architects in which he praised the McMath–Pierce solar telescope as “the most marvellous and moving of all mankind’s works in the desert” and described its unusual silhouette as “a letter from an unknown Cyclopean alphabet” [1]. The solar telescope had been commissioned from SOM in the late 1950s and assigned to a relatively new partner in the corporate firm: Myron Goldsmith. It was installed on Kitt Peak, a solitary mountain within the Papago Indian Reservation, about an hour from Tucson, Arizona, in 1962. One might question the relevance of publishing a critical review of a building completed more than 20 years previously, but Banham did not venture this far into the arid lands of the American Southwest until the early 1980s, when he extended his desert travels in preparation for his book, Scenes in America Deserta.

Intrigued by Banham’s high praise for the building, I convinced my family that Tucson, Arizona was the perfect holiday destination. Since moving to Los Angeles we had gone on a number of these road trips, fascinated – like so many Europeans before us – by the American motels, cheap diners, vintage gas stations and desert landscapes that make you feel like you’ve landed in your own road movie. Armed with Baudrillard’s Americana and with Banham’s book, which includes a description of the telescope, we set off on a ten-hour drive through the Mojave and Arizona desert. Arriving at the Indian reservation, a small secondary road branches off from the endless plains and a long and winding climb takes you up to the observatory – a collection of otherworldly figures standing on the mountain top. Even among this array of singular white shapes (spheres, domes, cylinders, hexagons, prisms, and any possible combination of the above), the solar telescope stands out. While most of the constructions resonate in some way with the idea of celestial vaults, planetary movements or stellar orbits, Goldsmith’s oblique structure, in the form of the lower part of the letter K, seems to belong to a different order.

The awkward geometric composition, outlined by a continuous hard-edged facade, raises questions as to the purpose of such an unfamiliar optical instrument. In the way it works, however, the solar telescope is actually very simple: one leg holds a large mirror up to the sky, rotated in such a way that it directs the sunlight (via the diagonal leg) towards a second mirror buried deep in the mountain. This mirror in turn reflects the sunlight to a third mirror – located roughly halfway up the shaft – that projects an image of the sun onto a large horizontal table. There, within the controlled environment of the observation room, scientists can measure, analyse and photograph the sun’s activity. The technical challenge for Myron Goldsmith was that the whole trajectory of the sunlight up and down the diagonal telescope shaft had to be realized within an extremely stable environment. Boring 130m into the mountain at one end, and pointing 65m up into the skies at the other – like “a steep sloping section of the Lincoln tunnel” [2], as the science reporter of the New York Times amusingly described it – the whole length of the shaft has to be kept free of wind turbulence, temperature variations or moving air particles in order to guarantee the sharpness of the projected images. To achieve this, the whole rectangular tube of the structure is heavily insulated and wrapped with a water-cooled copper windscreen, painted white to further reduce solar absorption. In addition, the tube is turned 45 degrees in order to deflect the heavy wind loads on the mountain top, giving the building its unusual aspect of a poorly executed origami swan. For an architect-engineer who firmly believed that architectural beauty is a direct outcome of structural expression, the solar telescope must have been a disquieting project to work on.

Myron Goldsmith had studied and then worked with both Mies van der Rohe in Chicago and with Pier Luigi Nervi in Rome. A proponent of the bones-outside-skin methodology, in both steel and concrete construction, he created visually powerful structural solutions in most of his architectural works. So the telescope’s hybrid structure – with its steel trusses and a freestanding concrete tower, all wrapped into a paint-covered metal jacket – was hardly an embodiment of his personal architectural ethos. At the time of its completion Goldsmith told the architecture critic Allan Temko that he felt that the design task was “too specialized” for the structure “to have broad significance” for the modern movement as a whole [3]. And indeed, although the building has an extensive press-map in the SOM archives, one cannot help but notice that most of the articles and reports come from the field of science. The specialized architectural press hardly picks up on the building, and on the few occasions when critics do mention it, they have a hard time describing its architectural expression. An “unusual sight” or an “efficient scientific tool” tends to be the best they can come up with.

So when Banham visits the telescope in the early 1980s and describes it as “extraordinary”, “marvellous”, “supreme”, “a humbling sight” and “a monumental sign of human presence” we have to understand that the cultural discourse has changed completely. The Land art movement – often pinpointed as starting with the 1968 exhibition Earth Works at the Dwan Gallery in New York, but developed in full over the course of the following decade – had played a crucial role in bringing about a whole new attitude towards landscape, sculpture and monumentality. Banham writes of the solar telescope: “Compared with this, the desert Earth works of sculptors like Robert Smithson or John Heizer are trifles, as is the minimalist sculpture of an artist like Robert Morris.” [4] Overlooking for a moment the fact that Banham keeps on calling Michael Heizer “John Heizer”, and that the triviality of these Earth works is certainly debatable, it is clear that for Banham these manmade artefacts can be approached in a similar way. Just as the works of Land art are largely defined by their setting and their relation to the natural environment, so Banham’s aesthetic appreciation of the telescope is based on its location and the way it “poses” itself on top of – or inserts itself into – the surface of the earth. And like a much older manmade artefact described in the book – San Xavier del Bac, a bright white Jesuit mission standing as a solitary object in the desert just outside Tucson – the telescope is described in relation to the landscape that surrounds it, as “an abstract gesture … silhouetted against an emptiness of air that is almost palpable." [5]

Though the specialised nature of the design may have prevented Myron Goldsmith from accomplishing his ideal of structural clarity and legibility, his skilful manipulation of the landscape makes the project truly extraordinary. The solar telescope recalls his unrealized design from 1978 for the Ruck-a-Chucky highway bridge near Sacramento, which makes a long curving span across a deep canyon suspended by steel tension cables. With this bridge, he took advantage of the surrounding woodland to hide all the anchor points for the tension cables within dense vegetation, so the road seems to float magically in the air. Even though we know the cables have to be there, the invisibility of their anchor points allows the fiction to play out in the same way that the hidden hands of a puppeteer allow the marionette to come to life.

Walking up to the solar telescope through the Kitt Peak National Observatory, visitors arrive at a Y-junction, with the solar telescope as a powerful beacon crowning the view of the road towards the left. Following this road for about 500m, you arrive at a neatly raked platform of black gravel – a precise horizontal surface with astonishing views over the surroundings. Apart from a somewhat hidden steel door to a small observation room, there is not a single reference to human scale here – only the vastness of the landscape with the nearby mountains of Mexico, the infinite cloudless sky and the unbearable heat. In sum, you have an object on a perfectly horizontal pedestal, surrounded by extreme topography; a platform to intensify the sculptural monumentality of the telescope. Go right at the Y-junction, however, and the road takes you down, passing a small basketball field, to the actual entrance to the solar telescope: a fairly generic modernist glass facade, with rhythmic vertical window framing, giving access to underground staff quarters and an observation room. Like a magician who dramatically snaps his fingers and waves his hand to divert the spectator’s attention, Goldsmith uses the fork in the road, the natural topography and perspectival tricks to orchestrate the encounter with the telescope, making it an immaculate and powerful experience. All recognizable elements and details of architecture-as-we-know-it (parking spaces, entrance doors, window frames, ventilation grills, etc.) are sifted out to transform the diagonal shaft and supporting column of the solar telescope into pure abstract drama. And one comes to understand that the architect-engineer renowned for his rational geometries, radical engineering and exposed structures is in equal measure a magician and a puppeteer who conceals, distracts and disguises in order to stage his architectural fantasies.

Thanks to Mariana Narvaez and Carl Krause at SOM for their support and to the SOM-archives for making the research material available. 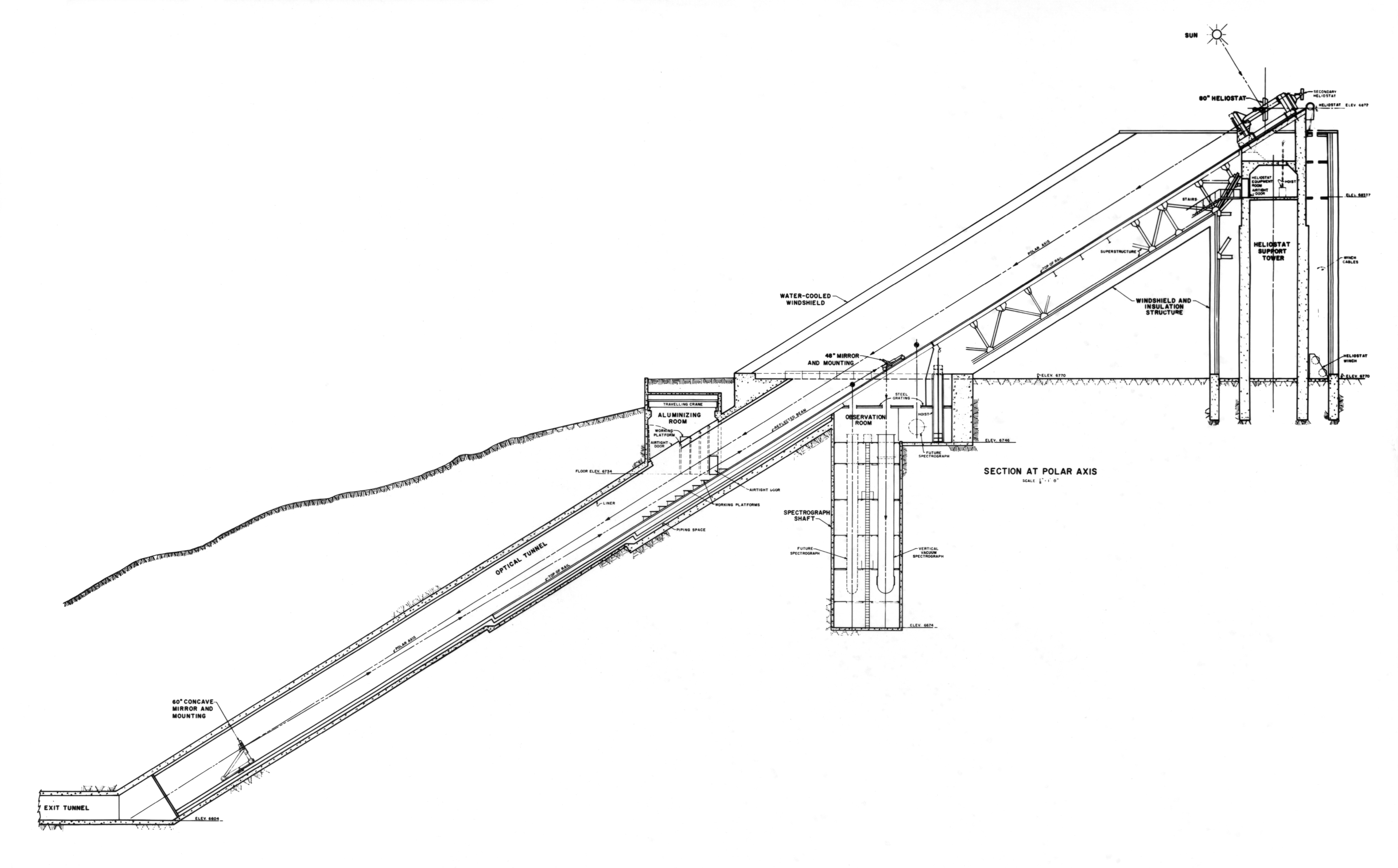 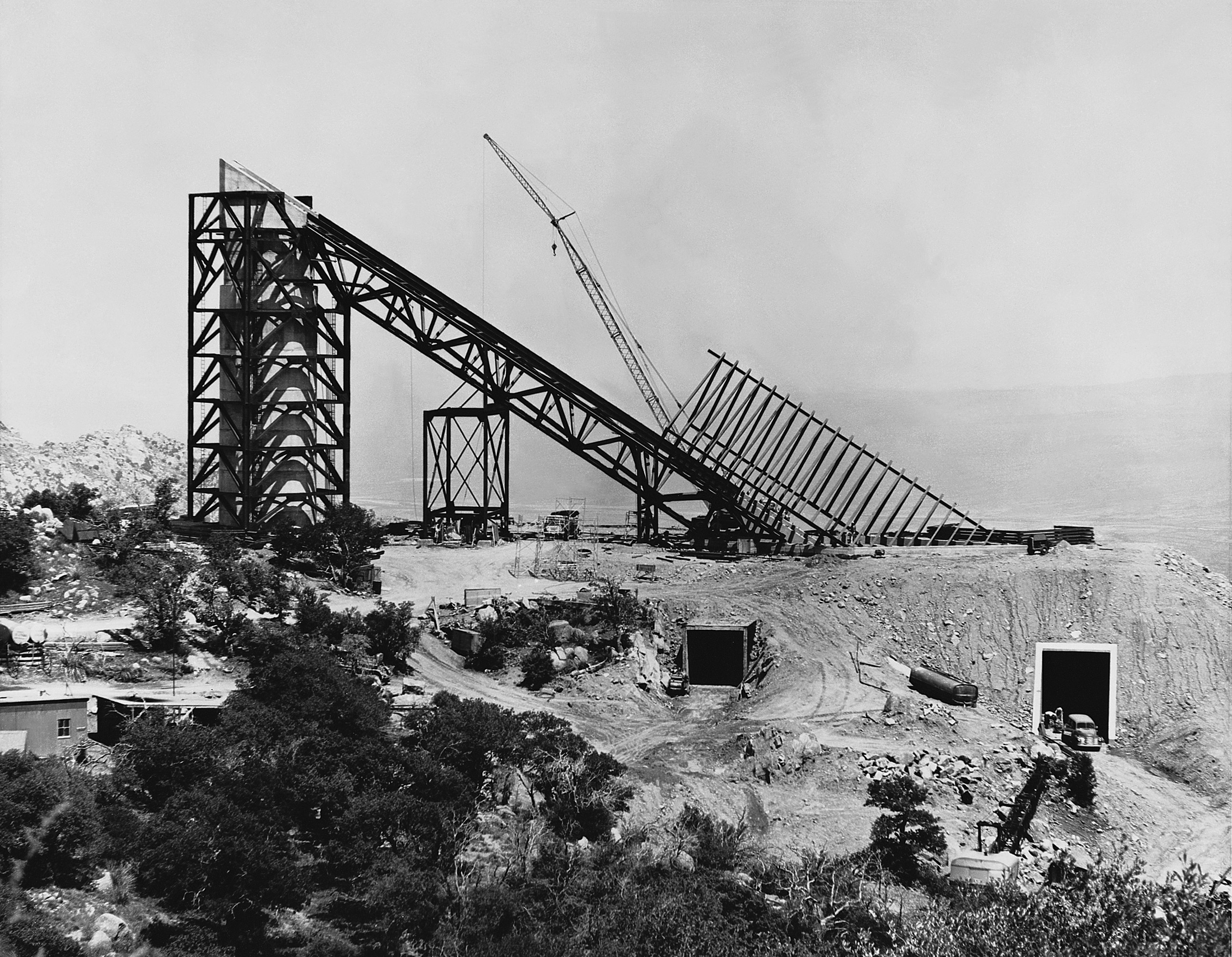 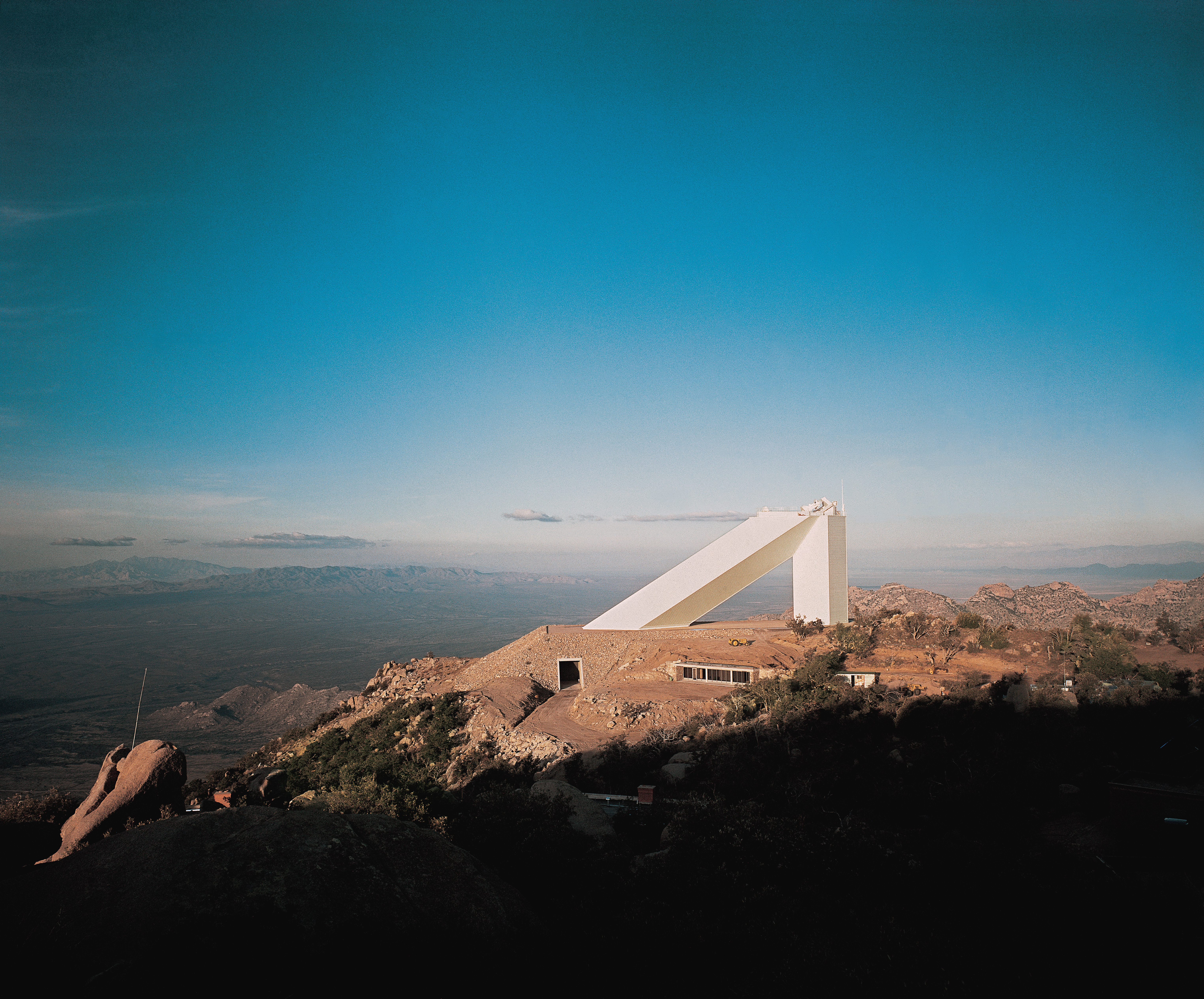